CONWAY — About 40 people gathered in Schouler Park in North Conway Village last Thursday for a
candlelight vigil organized by local non-profit Starting Point to raise awareness about domestic violence.
It was the second year Starting Point held the October event as part of Domestic Violence Awareness Month.
Organizers were pleased the turnout had grown from about 25 people last year. 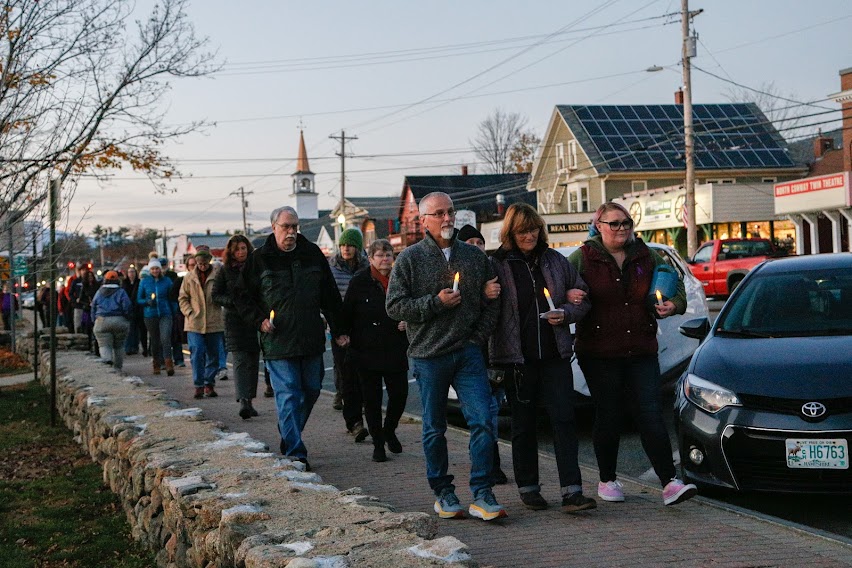 A group of around 40 walks along the sidewalk at the Starting Point candlelight vigil in North Conway’s Schouler Park for Domestic Violence Awareness Month on Oct. 20. (RACHEL SHARPLES PHOTO)

As the sun set, the group lighted electric candles and sang, “When I Breathe In,” led by the Rev. Mary Edes.
They then walked to the gazebo by the New England Ski Museum, people shared stories and intentions for the
coming year.

Al Falcone of Madison spoke movingly about losing his daughter, Erica, to an overdose at the age of 25, three
months ago.

“Erica struggled for years with sexual violence and domestic abuse, but she couldn’t figure out how to get help,”
he said. “She couldn’t handle the trauma and she couldn’t get the help. If she’d been aware of Starting Point or
an organization like that, she would have gotten the support for the care that she needed.”
For instance, he said, his daughter couldn’t figure out how to fill out a restraining order.
“So she gave up on that,” he said, adding, “She might have had a different outcome if she was aware of this
organization.”

He said his intention is “to try and help the next Erica.” By spreading the word about Starting Point, he said,
“we’ll save that next Erica from being a victim. Let’s do our best to do that.”

Starting Point: Services for Victims of Domestic & Sexual Violence offers a 24-hour crisis line at (800) 336-
3795; a shelter for victims of domestic violence, sexual assault and stalking; court and hospital advocacy, as well
as support groups.

Executive Director Deb Weinstein said after the loss of her first husband, she was very vulnerable and got into a
bad relationship, one that she left 12 years ago. “Even as an executive director, that doesn’t mean that I’m
immune to it. Nor did I see it, because sometimes our blinders are on,” she said.

That is one of the messages that Starting Point wants people to hear — that domestic violence can occur
anywhere, in all races, cultures, religions and sexual preferences.

In a column about domestic violence, Starting Point Outreach Coordinator Raetha Stoddard noted there is no
easily identifiable profile of a victim. “Being asked to describe a ‘typical’ victim is like identifying which tree is
more likely to be hit by lightning.”

Weinstein has first-hand knowlege of the need for activism and the effectiveness of advocacy. Her greatgrandmother survived the 1911 Triangle Shirtwaist Factory fire in New York, where many women died because
they had been locked in the building while they worked. As a result, her grandmother became a union organizer.
“My grandmother was a great activist. I watched her and learned from her and said, ‘That’s what I want to do.’”
Giving credit to Stoddard for effectively describing what Starting Point does, Weinstein said, “It’s not heroic and
it’s not charity; it’s social justice.” 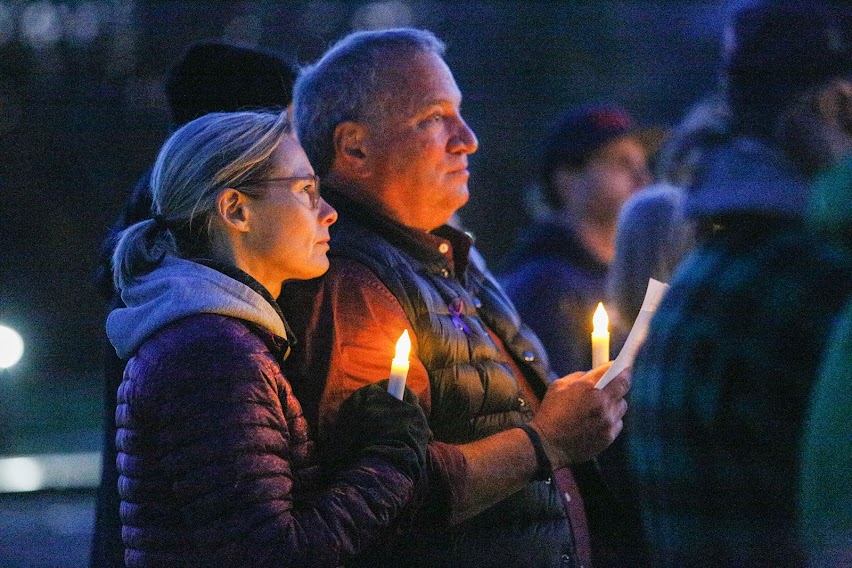 Several people thanked Stoddard, who said, “That’s my job. I want to acknowledge our staff and our volunteers. They truly know what they’re doing. They’re experts with enormous hearts. And they will leave no victim behind.”

Victoria Laracy read a letter on behalf of U.S. Rep. Chris Pappas, thanking Starting Point for its work over the
past four decades.

Starting Point Board President Beth Carpenter then said her intention last year was to share her own story more
openly. “It’s taken me a really long time, I think, to heal from some past trauma, and I don’t like to talk about it,”
Carpenter said, but added that working with Starting Point has been healing for her.

“What really resonates with me, is the prevention team, talking with people in the community about healthy
relationships and boundaries, and all of that work that goes into helping those we serve to heal.”

Starting Point has educational programs for schools, professionals and the community aimed at ending the cycle
of domestic violence by teaching about healthy relationships and raising awareness of abuse, violence, bullying
and harassment, and the resources available to help. One of Starting Point’s latest programs is the men’s
advocacy group.Two members of that group spoke at the vigil: Jamie Oldham and state Rep. Jerry Knirk (DFreedom). Oldham said when he came to Starting Point, he met Stoddard, who listened to his personal story and
provided support. “Why don’t people listen to women as much as they should?” he said. “They’re the ones that
live it. They’re the ones that witness it. They’re the ones that feel it. But if it takes a man to step up, I will be that
man, along with Mr. Knirk, with the men’s advocacy group. Knirk, who also supports legislation for assistance
and prevention, said “The point of (the men’s advocacy group) is that it’s time for men to stand up and join in
the work to make domestic and sexual violence a thing of the past. We need to start modeling the appropriate
behavior and we need to reach out to boys and start to teach them the appropriate behavior.” The men’s group’s
next meeting is in January. 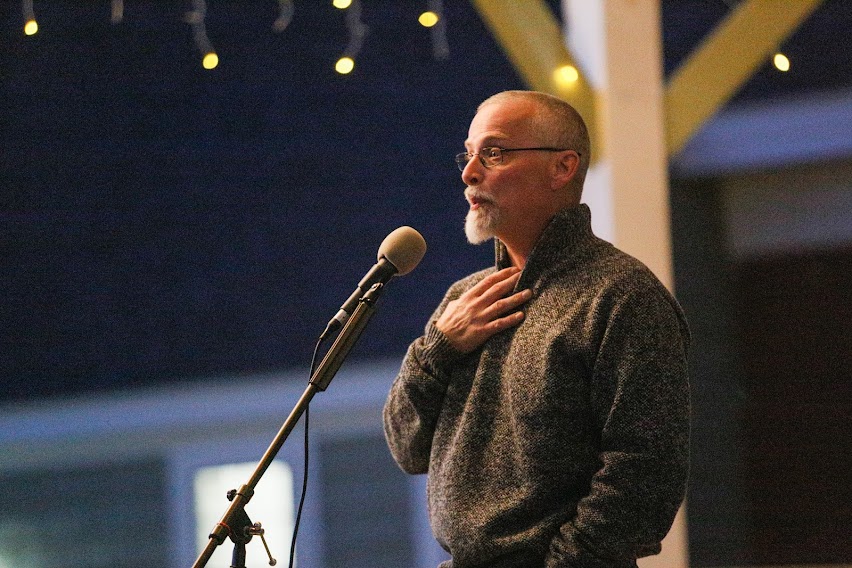 Jamie, who is involved with the men’s advocacy group, speaks to the small crowd gathered at the Starting Point candlelight vigil in North Conway’s Schouler Park for Domestic Violence Awareness Month on Oct. 20. (RACHEL SHARPLES PHOTO)

Oldham said at next year’s vigil, “Hopefully there’ll be a bigger crowd, and more men to speak up and say, ‘Not
in our community, it’s not going to happen anymore.’”

All services are offered free of charge and are strictly confidential.